Now you can pay your Maintenance and Assessment Fees to the Association with a Credit Card.
Just  go to: https://webvault.bbt.com/as/paymentservices/start.aspx#coupon
Enter Bill Pay Number, Serial Number and Unit Number as they apperar in your Payment Coupon. 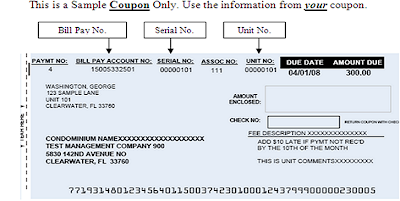 A convenience fee of 4% of the transaction amount will apply.
The non-refundable convenience fee is charged by the bank for processing your payment online; the association or management company will not receive credit for the fee.
No comments:

After falling for nine months straight, single-family home prices in South Florida rose in May as the spring buying season boosted values, according to Standard & Poor’s Case-Shiller 20-city housing index released Tuesday.
Home prices in the region including Miami-Dade, Broward and Palm Beach counties rose 1.2 percent between April and May, after falling 0.2 percent to a new recession low in April.
Still, compared to the same month last year, prices were down 5.3 percent, as foreclosures and distressed short sales continued to dominate the market.
Prices are back on the level they were at in the summer of 2003, according to the Case-Shiller index, which tracks repeat sales of existing homes and does not include condo sales.
Nationwide, prices across the top 20 cities rose 1 percent in May but remained 4.5 percent below their year-ago levels.
South Florida home prices rise in May MiamiHerald.com
No comments:

Signed: Helena Del Monte, President of the Board
NOTE: MEETING FOR UNIT OWNERS ONLY
No comments:

Here's all the Miami-Dade cities that received Walk Scores:


Miami Ranked 8th Most "Walkable" City in America
No comments:

Cell phone was found in the pool area