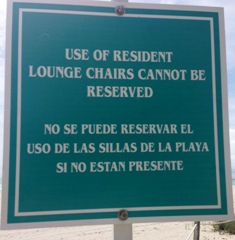 Walking around I just noticed this new sign by the Beach.

What is your opinion?

WASHINGTON -- U.S. home prices jumped 10.9 percent in March compared with a year ago, the most since April 2006. A growing number of buyers are bidding on a tight supply of homes, driving prices higher and helping the housing market recover.
The Standard & Poor's/Case-Shiller home price index released Monday also showed that all 20 cities measured posted annual gains for the third straight month.
And prices rose in 15 cities in March from February. That's up from only 11 in the previous month.
Annual prices rose in Phoenix by 22.5 percent, the biggest gain among cities. It was followed by San Francisco (22.2 percent) and Las Vegas (20.6 percent).
New York City had the smallest annual increase, at 2.6 percent. It was followed by Cleveland with 34.8 percent.
Raed More: http://www.miamiherald.com

The 2013 hurricane season is here, and it runs from June 1st through November 30th. Making a hurricane plan ahead of time and stocking up on vital supplies will go a long way toward helping you and your loved ones stay safe in the event of a storm.

More than 1.75 million people are within one of Miami-Dade County's five Storm Surge Planning Zones. Miami-Dade County, in partnership with Florida International University, has created the Storm Surge Simulator, which combines historical data and modern day technology to illustrate what storm surge could mean to you and your home.

Hurricane season officially begins on June 1, so you should already know what you need to get prepared -- and the County can help!

Friday, May 24 7 a.m. to Tuesday, May 28 7 a.m.
Cross streets between Washington and Collins Avenues from 6 - 15 Street, restricted to local vehicles only (zoned decals permitted)

Friday, Saturday and Sunday Night from 7 p.m. to 7 a.m.
Washington Avenue will be southbound only
Collins Avenue will be northbound only
Access to cross streets between 5 and 17 Streets are for local, zoned decal access only.
DUI Checkpoint: MacArthur Causeway Eastbound
Friday 7 p.m. -  Saturday 7 a.m.
DUI checks throughout the city all weekend

Welcome to the 14th Annual Urban Beach Week, one of the Largest Urban theme event in the world!
4 Days of parties, sexy people, hot cars, hot motorcycles, A list celebrities, and famous sport players. Miami beach has it all during Urban Beach Week!

Where:
Miami Beach, Florida "People travel from all over the world to attend"
When:
Memorial Day Weekend May 24 to the 27, 2013
What to Expect: Over 300,000 People having a good time. The livest night life in the world for Urban club goers, Hotels full of beautiful people, street full of exotic $100,000 cars and kited out bikes.
Urban Beach Week Protest "Don't Believe the Hype"
First there is no Urban Beach Week protest, there is a handful of people o a Facebook page "90% of the accounts are fake" claiming to be protesting Urban Beach Week 2012, only one problem, the Mayor said NO! Urban Beach Week will continue and they are looking for way to make it better.  So please, don't be live shit you read on the internet, Urban Beach Week 2013 is going to be bigger and better. Book early!!
Read more:  http://www.blackbeachweek.us/
No comments:

This blog does not belong nor represents the views of the Pavilon Condo Association
No comments:
Newer Posts Older Posts Home
Subscribe to: Posts (Atom)