The Pavilion has a new Board of Directors...

The new Board of Directors: 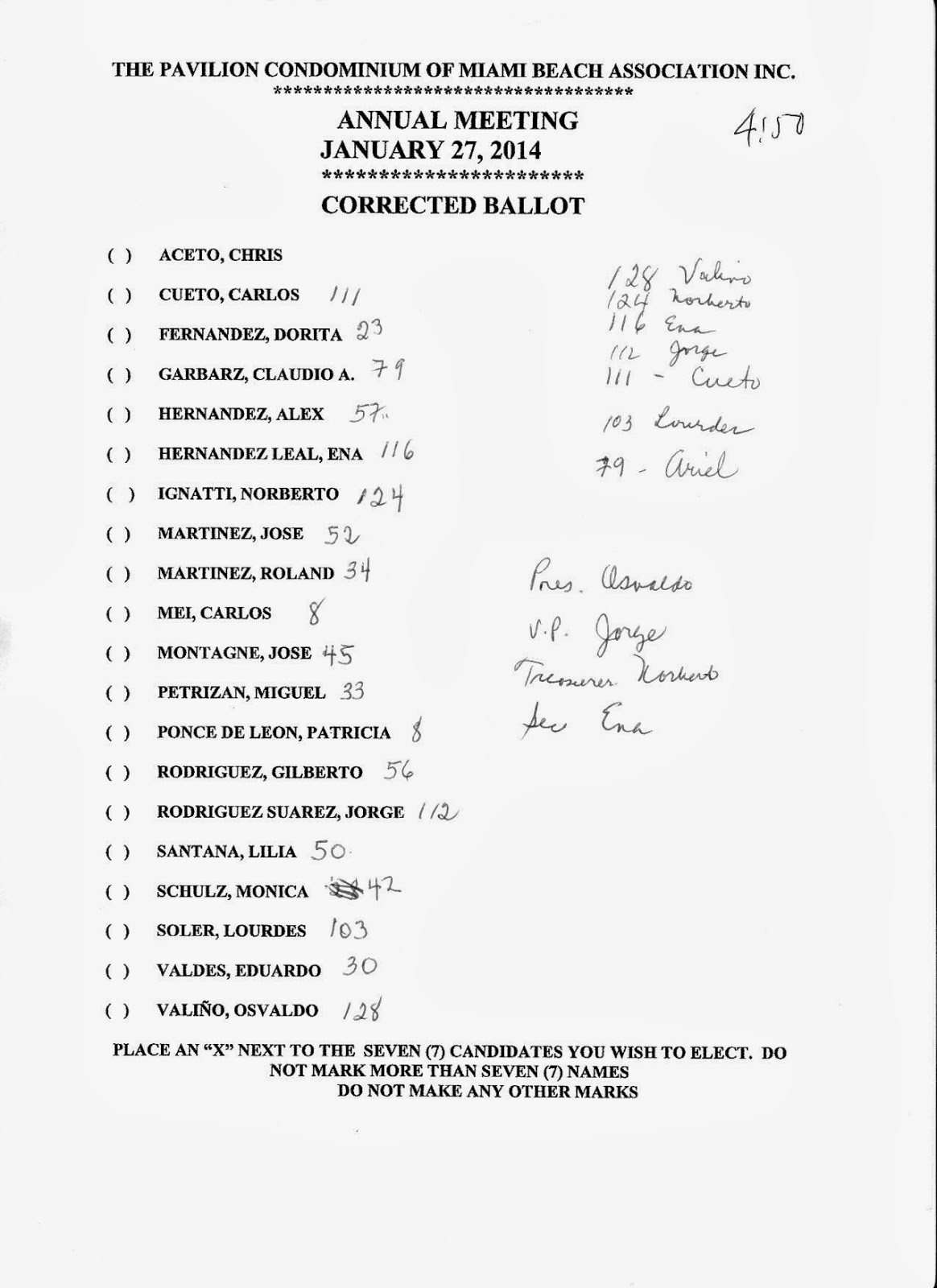 More people want to own homes in South Florida, and they’re spending more money to do so, as the local market finished 2013 with solid price increases.
“Despite more homeowners listing homes for sale in Greater Miami, strong demand continues to yield rapid absorption,” Francisco Angulo, residential president of the Miami Association of Realtors, said in a statement Thursday. “Such demand is driving significant price appreciation.”
Still, after a frenzied pace of price increases over two years, experts expect slower price gains through 2014. “It should be in the single-digit range,” said Liza Mendez, chairman of the Miami Association of Realtors and broker/owner of Pedro Realty International in Hialeah. “That’s the expectation —and that’s a solid market.”
“With inventory levels going up a little bit, prices are going to be a little more steady, which is a good thing. I think they were going up a little too much a little too quickly,” said Nelson Gonzalez, senior vice president at EWM Realty International in Miami Beach.
The median price of a single-family home in Miami-Dade County rose 15 percent to $246,180 in December from $214,060 a year earlier and was up 5.9 percent from November 2013, according to the Miami Association of Realtors.
Miami-Dade single-family home sales rose 9.8 percent in December, with 1,140 closings, up from 1,038 a year earlier, the Realtors’ group said. Single-family home sales in Miami-Dade jumped 16 percent from November 2013 levels, which had showed a modest dip in sales.
The median price of a Miami-Dade condo rose 7.4 percent to $175,000 from $163,000 a year earlier, but was down 2.8 percent from November. Miami-Dade condo sales rose 2.2 percent in December to 1,426 closings from 1,395 a year earlier and were up 11.9 percent from November.
Read more at miamiherald.com

OUR CONDO  CRAZE  BOARD CERTIFICATION COURSE AND DAY OF EDUCATION AT THE HARD ROCK HOTEL AND CASINO IN HOLLYWOOD, FLORIDA.

REMEMBER.....FLORIDA LAW REQUIRES THAT BOARD MEMBERS GET CERTIFIED WITHIN NINETY (90) DAYS OF GETTING ELECTED TO THE BOARD ...OR THEY ARE REMOVED FROM THE BOARD.

WHAT BETTER WAY TO GET CERTIFIED THAN BY ATTENDING A FANTASTIC FREE EVENT INCLUDING BREAKFAST FOR EVERYONE?  MEET FELLOW BOARD MEMBERS, COMMUNITY ASSOCIATION MANAGERS, THE SHOW'S SPONSORS, OWNERS AND OTHER EXPERTS IN THEIR RESPECTIVE FIELDS.

REGISTRATION STARTS AT 8:00 A.M. AND
OUR BOARD CERTIFICATION COURSE STARTS AT 9:00 A.M. SHARP.  TAKE THE COURSE THAT  7,000 FLORIDIANS HAVE NOW PARTICIPATED IN.  LISTEN TO AND ASK QUESTIONS OF OUR ESTEEMED PANEL.  COMMUNITY ASSOCIATION MANAGERS RECEIVE 4 CONTINUING EDUCATION CREDITS FOR ATTENDING.

WHEN THE BOARD CERTIFICATION CLASS IS DONE, THE FOLLOWING FREE CLASSES WILL ALSO BE OFFERED, EACH PROVIDING ONE CONTINUING EDUCATION CREDIT FOR COMMUNITY ASSOCIATION MANAGERS

TO REGISTER TO ATTEND THE CONDO  CRAZE BOARD CERTIFICATION COURSE OR ANY OF THE ABOVE COURSES,OR IF YOU WOULD LIKE TO BE A SPONSOR, CLICK HERE OR CALL OUR OFFICE AT:
855-4-CONDOCRAZE