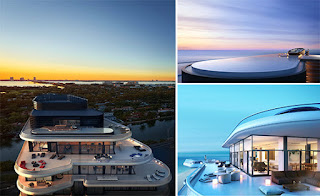 A penthouse in the newly completed Faena House has just been sold for $60 million — a price that breaks all residential records in the Miami area.

The eight-bedroom, 12,516-square-foot penthouse features 9,900 square feet of exterior space and a 70-foolong rooftop pool, the Wall Street Journal first reported. It was listed in 2013 and went into contract in April 2014.

Jeffrey Miller of Brown Harris Stevens Zilbert represented the buyer, who paid $4,794 per square foot for the unit. This sale beats Miami’s record price for a single-family home, which was set in 2012 with the $47 million sale of 3 Indian Creek Island Road. It also marks a record for condominium sales, beating the $27.5 million closing of a Continuum unit in December, and a combined penthouse at the Miami Beach Edition for $34 million, also in December.
The sale has not yet cleared Miami-Dade County records.

Blankfein and his wife, Laura, paid $9.5 million for unit 8-A, TRD reported last week. Other buyers include Jose F. Fanjul Jr., of Fanjul Corp., a major player in the United States’ sugar industry, and Mark Rachesky, the chairman of Lions Gate Entertainment.

Faena House marks the first of four planned oceanfront condo towers in the ultra-luxury project, which stretches from 3200 to 3500 Collins Avenue in Miami Beach. The 18-story tower, in the 3300 block of Collins Avenue, began recording closings on Sept. 3.  About half of the now-42 units have closed. Faena House was designed by Foster + Partners and includes amenities such as a gym, spa, pools, underground garage and a beach club.

Next is the Faena Hotel Residence, formerly the Saxony Hotel, which will include 13 penthouse residences. In April, developer Alan Faena announced the addition of two condo towers to his complex in Mid-Miami Beach: Faena Versailles Contemporary with 41 units and the Faena Versailles Classic with 22 units — in the 3400 block of Collins Avenue. — Katherine Kallergis