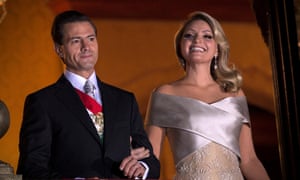 Political and civil society leaders in Mexico are calling for an investigation into the first family’s use of a luxury apartment in Miami, which has raised the spectre of a fresh conflict-of-interest scandal.
Opposition parties demanded that authorities probe the property arrangement between a Miami-based Mexican businessman and Angelica Rivera, the wife of President Enrique Peña Nieto. 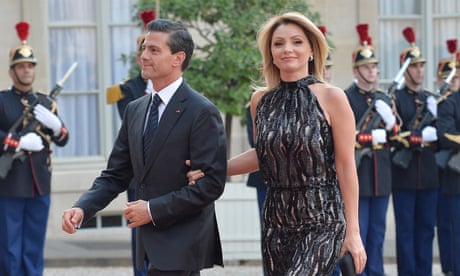 The revelation has prompted fresh scrutiny of the embattled president’s ethics following an earlier scandal over his family’s purchase of a Mexico City mansion, known as the Casa Blanca, from a government contractor.

Suspicion in the latest case focuses on why the businessman, Ricardo Pierdant, let the first lady use the $2.05m Miami apartment – and also why one of his companies paid close to $30,000 in property taxes on her behalf for a neighbouring apartment which she owns.

The two main opposition parties have asked for an investigation into the Miami apartments, which are in Ocean Tower One in Key Biscayne. Photograph: Handout
Pierdant is a close friend of the first family and his company, Grupo Pierdant, was expected to bid for lucrative contracts to run Mexico’s ports.

The first lady cannot receive lucrative favours without authorisation from the federal executive’s legal counsel, an oversight agency, wrote Salvador Camerana, a columnist, in El Financeiro. “The president of the republic cannot accept that his friends extend favours worth thousands of dollars to him, his wife, their children, or to their collaborators.”

Eduardo Bohorquez, head of the advocacy group Transparency International’s Mexico chapter, told the Wall Street Journal that the first couple faced renewed scrutiny. “It reignites the discussion over the links that the president and his wife have with businessmen, particularly the type of relation that they could have with someone who pays your property taxes.”

The two main opposition parties, the National Action party (PAN) and Party of the Democratic Revolution (PRD) have asked for an investigation into the Miami apartments, which are in Ocean Tower One, a gated community with a pool, tennis courts and white glove concierge in Key Biscayne, an affluent enclave in Miami-Dade County.

Such a probe would likely be the responsibility of federal auditors and the comptroller’s office.
In a statement, Eduardo Sánchez, the president’s spokesman, said that the first lady used Pierdant’s apartment only on rare occasions and that there was no conflict of interest because the businessman had no federal government contracts and was not participating in current bids.

The spokesman declined to say why Pierdant’s company, Biscayne Ocean Holdings, paid taxes in 2014 on the first lady’s apartment, unit 404, which is directly beneath his own unit 304.
In a statement the spokesman also questioned the Guardian’s veracity and claimed the newspaper had apologised several years before over a separate story about the president. The Guardian has not apologised for its reporting. 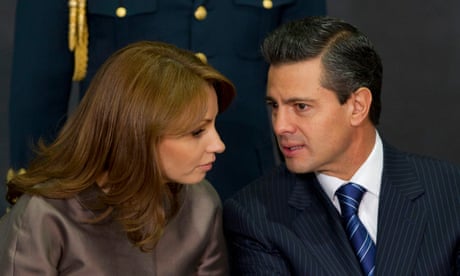 Mexico Catholic church accused of bending marriage rules for president
Read more
Pierdant, the co-founder of DecoBikes, a bicycle-sharing program in Miami and San Diego, has declined to speak to the Guardian, but a Mexican news website quoted him saying the first lady, a former telenovela star, asked him to handle the property tax and reimbursed him.

At the time Pierdant bought the Key Biscayne apartment in 2009 he was overdue on mortgage payments for another Coral Gables property, according to court documents seen by the Wall Street Journal. Asked by Univision how he could afford to pay one apartment in cash while owing money on another property, Pierdant was quoted: “I had the money available.”

The outcry over the first family’s property dealings in Miami comes at a delicate time for Peña Nieto, who is battling a sluggish economy and rampant crime. A poll taken before the current row showed his approval ratings dropping to 23%, his worst showing since taking office in 2012. The newspaper Reforma said it was the lowest approval rating for a president since it began publishing similar polls in 1995, just after a massive currency devaluation.

The Miami property arrangements have fuelled unease because they echo aspects of the first lady’s purchase of a $7m mansion in Mexico City from another businessman with government contract – the so-called Casa Blanca (White House) scandal.

It landed like a bombshell in 2014, wrecking Peña Nieto’s reformist credentials and reviving long-standing concerns about corruption in the ruling Institutional Revolutionary party (PRI).

The first lady later returned the property and last month Peña Nieto apologized, saying the scandal had dented faith in the presidency and government. “For this reason, with all humility I ask your forgiveness.”

The president made the apology as he signed into law an anti-corruption system that his PRI party hopes will boost its credibility in the run-up to the 2018 presidential election.