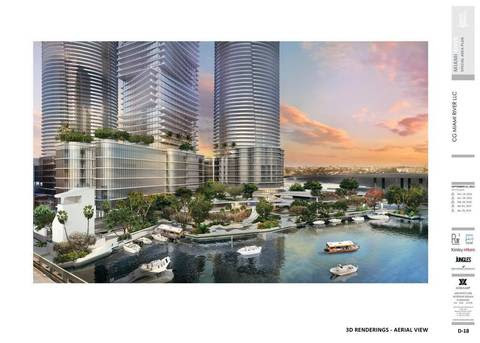 Promising to invest $21 million into public spaces, a developer is seeking special permission Thursday to turn six acres along the Miami River into a $1 billion complex of shops, restaurants and towers with more than 1,600 condos and apartments.

The Miami River project, located between Southwest Second and Third Avenues, the river and Southwest Seventh Street, includes two 58-story and two 60-story glass and steel towers overlooking two low-rise commercial buildings to the north along a public river walk with boat slips. Elevated walkways and gathering spaces orbit parts of the project, and a new, private street would cut north to the river through the district’s core, lined the whole way by three stories of retail.

Miami commissioners will vote Thursday on whether to allow CG Miami River LLC to build the 4.2-million-square-foot project, which is taller and denser than what’s allowed by right on the site. The proposal comes before them with the blessing of Miami’s administration, which is partnering with the developer to seek special zoning regulations and extra density in exchange for millions in upgrades to Jose Martí Park and the river walk.

“We are creating a new neighborhood that will transform the Miami River’s urban environment into a dynamic, sustainable and safe mixed use destination that will connect the energy of downtown and Brickell to the cultural richness of Little Havana,” developer Ari Pearl said in a statement.
The design has been in the works for more than a year, dating back to when developer Pearl and the New York-based firm Chetrit Group assembled six acres of land from various owners along the Miami River, including the Finnegan’s River restaurant and the Pleasure Emporium adult superstore. CG Miami River LLC purchased the land for roughly $100 million, enticed by the river and the area’s proximity to Brickell.