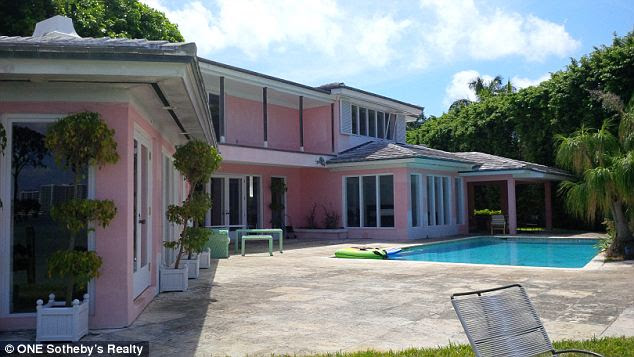 U.S. authorities seized the mansion in 1987

The house is now owned by Christian de Berdouare, who founded Chicken Kitchen, and his wife, journalist Jennifer Valoppi

They were not looking for old silver coins or gold bars from some Spanish galleon sunk in Biscayne Bay. The treasure they sought was bundles of dollars. In the worst of cases, maybe drugs or human remains.

“Pablo Escobar used to launder a lot of money. He had so much that he could not launder it all, and it’s known that he hid barrels full of money all over,” said Nokolay Malchev, an inspector from Kellyco Metal Detectors.

The mansion, rose colored with black roof tiles, was owned in the 1980s by Escobar, the Colombian drug lord who was one of the richest and most dangerous criminals of his era.

Pablo Escobar used to launder a lot of money. He had so much that he could not launder it all, and it’s known that he hid barrels full of money all over. Nokolay Malchev, an inspector from Kellyco Metal Detectors.

Christian de Berdouare, a businessman who founded the Chicken Kitchen fast-food chain, is the current owner of the property, 5860 North Bay Rd. He and his wife, journalist Jennifer Valoppi, will have the mansion demolished on Tuesday.

“We want to close a very dark chapter in the history of Miami,” said Valoppi, who vividly remembers the violence that wracked Miami three decades ago, sparked by a war for control of the drug traffic. Escobar, she added, “killed so many people. We want to erase those memories and create something new and inspiring.”

Only a banyan tree will remain on the 7,336-square-foot plot. A new house with a modern design and big picture windows will be built there, supervised by de Berdouare, who bought the mansion in 2014 for $9.65 million.

The current mansion, with four bedrooms, six bathrooms, a pool and garage, was built in 1948. It has a marina and 150 feet of frontage on Biscayne Bay with a view of downtown Miami.

Escobar, nicknamed “El Patrón” — The Boss — bought the property in March 1980 for $762,500, according to Miami-Dade County public records. The name Pablo Escobar is listed in a document transferring ownership of the property.

Although it’s not clear whether the Medellín Cartel chief ever lived in or even visited the property, Jim Shedd, a former Drug Enforcement Administration agent, told the owners that it’s very probable the property was used as a hideout by Escobar’s gunmen and a landing point for tons of cocaine.

U.S. authorities seized the mansion in 1987, along with $20 million that the Colombian trafficker had in several properties around Florida. He was killed in a shootout with Colombian authorities in 1993.
Attorney Roger Schindler bought the house from the U.S. government in 1990 for $915,000. The mansion was abandoned several years ago after a fire destroyed at least two rooms, the current owners said. During that time, the property was vandalized, some of its walls covered in graffiti, some windows broken.

Holes punched in the walls indicate that someone may have been searching for valuable objects left behind by the drug traffickers, according to the treasure hunters.

De Berdouare said he’s not interested in remodeling the mansion and using the notoriety of its former owner to rent it for special events, following the example of a group of business people who last year bought Al Capone’s mansion on Palm Island.

“We were there for a wedding and met the owners of the house. They told us that they were not getting the return on their investment that they were expecting. It’s clear that this is not an easy undertaking,” the businessman said.

De Berdouare said he and Valoppi have not decided whether they will sell the new mansion once it’s built.

“We own three properties on this street. Depending on which one sells, we might move to this one when it’s ready,” he said.

Meanwhile, ONE Sotheby’s International Realty, representing the owners, has put a value of $21 million on the future mansion.