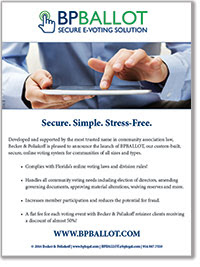 Today is a very exciting day as we announce the launch of BPBALLOT, the proprietary online voting software system developed by the law firm of Becker & Poliakoff.

It has been almost 9 months since Florida law was changed on July 1st, 2015 to allow members in all types of community associations in Florida to cast votes online rather than using paper proxies and ballots. BPBALLOT represents a sea change for communities throughout Florida who have struggled for years or decades to encourage member participation in votes to elect directors, amend the governing documents, waive reserves, approve material alterations, etc.

For communities with significant out of state (and out of the country) owners, BPBALLOT will allow those members to be more engaged with their communities. Other benefits can include fraud prevention, cost effectiveness and the ability to cut down significantly on the time it takes managers and boards to handle membership votes..

The Miami Herald recently ran an investigative series on association voter fraud uncovered in two Miami-Dade communities. In one condominium they had 115% voter turnout and in the other they uncovered more than 80 forged signatures on ballots. The reality is that if you do not have paper ballots, you do not have the ability to forge a signature or tamper with a ballot box. While online voting will not appeal to everyone, it does represent the ability to use technology to overcome some of the problems which have plagued associations in Florida for far too many years.