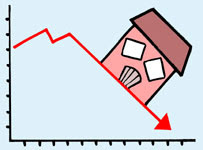 The number of existing home sales in Miami-Dade County took another plunge in October, dropping 22 percent compared to October 2015, according to a monthly report released Tuesday by the Miami Association of Realtors.But heavy competition among locals for mid-range homes priced between $300,000 and $600,000 means prices keep going up.

Condo sales took a big hit, as developers pump new inventory into the market. Sales for existing condos fell to 983 in October, down 30 percent year-over year. Single-family homes fared better, with the number of transactions dropping by 13 percent to 997.

The slide continues a trend that emerged earlier this year. Miami-Dade home sales fell 15 percent in September, 3 percent in August and 21 percent in July.

Much of the decline is due to a drop-off in the county’s foreclosure inventory — that’s a good thing because it means fewer people are losing their homes — and a slumping luxury market. A strong dollar has hurt foreign buyers, especially those from Latin America.

But a lack of affordable homes ($300,000 and under) is cause for concern, according to the Realtors’ association. Inventory in that price range dropped 28 percent year-over-year. Miami is already one of the nation’s least affordable housing markets.

As in previous months, sales were strongest for homes priced between $300,000 and $600,000. The number of transactions in that price category rose 19 percent year-over-year.

Brokers have warned that as sales slow down, sellers will need to lower their asking prices for luxury homes.

Mark Sadek, chairman of the Realtor’s association board, found optimism in the October numbers.
“Miami’s evolution into a world-class global city is attracting domestic homebuyers from throughout the United States,” Sadek, a Coral Springs Realtor, said in a statement. “The middle of our market continues to see growing demand. Homebuyers want to live in a young global city with top-flight art, culture, entertainment and education.”

October also saw a drop in home sales in Broward County. The number of residential transactions there fell 13 percent year-over-year.