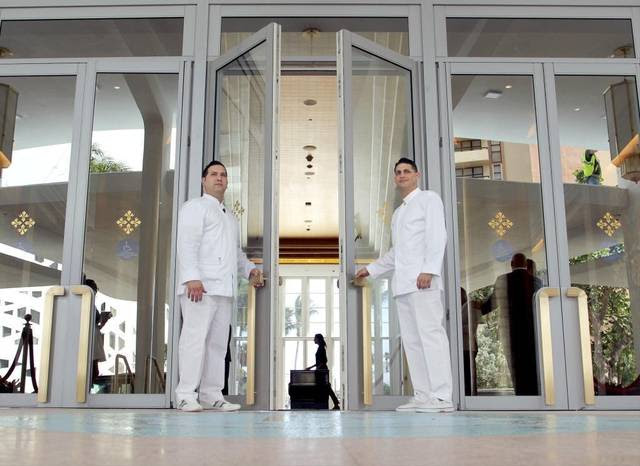 A 30-foot-long red carpet leads into the “Cathedral,” a sweeping lobby lined with massive gold-leafed columns and edged with elaborate floor-to-ceiling murals depicting lush tropical scenes. The Living Room is a movie set of red leather armchairs, zebra-print couches and lacquered burled wood tables, complete with grand piano. Columns edging the outdoor terrace are crusted with ceramic seashells — just one of many intricate details guests will find at the Faena Hotel on Miami Beach when it opens Tuesday.

The hotel, at 3201 Collins Ave., marks the public debut of the Faena Arts District, the $1 billion patch from 32nd Street to north of 35th Street between the oceanfront and Indian Creek. Its sold-out Faena House condo, designed by the firm of star architect Sir Norman Foster and home to a record-setting $60 million residence, opened earlier this fall. Last December, Faena reopened the historic 50-room Casa Claridge’s, originally envisioned as a company guest house but so popular it has been opened to the public. Faena Hotel is the once-neglected mid-Beach area’s first “new” public space.
New, in that the 1948 Saxony Hotel was completely gutted. Historic features — terrazzo floors, the Cathedral columns, a fireplace surround — were rescued and restored. Literally all other elements inside the hotel are new, as is a second building that houses chef Paul Qui’s pan-Asian Pao, and 220-seat dinner theater that’s due to open at the end of December.

The arts district is a partnership between Argentine developer and self-described “urban alchemist” Alan Faena and Ukranian-American investor Len Blavatnik. The pair collaborated on Buenos Aires’ former warehouse historic district, Puerto Madero, creating the city’s hippest zone with art activations and architecture by international stars. The plan for the Miami Beach district is similar. The Rem Koolhaas-designed Faena Forum, due to open in late spring 2016, will offer exhibitions and performances to the community under the artistic direction of Ximena Caminos, Faena’s work and life partner.

“We are creating a neighborhood experience with a hotel in it,” Faena said.

And not just any hotel. The entry offers views through the Cathedral and across a deck to the ocean. Most of the guest rooms — 111 of the 169 — are suites. The Terre Sante spa — named for the estate Faena and Caminos own in Uruguay — covers 22,000 square feet and includes a hammam, ice chamber and couples treatment suite with ocean views. A butler serves each guest-room floor.
The idea, Faena said, is to reclaim the luxury and service that was Miami Beach’s hallmark in its heyday.

“Miami was always about fantasy. We are trying to bring back that glorious moment of fantasy and glamor,” said Faena, “but to create it in a modern way.” Guest rooms combine classic Miami Beach touches — lamps resemble staghorn coral — with Art Deco motifs, contemporary art and plush fringed red couches straight out of a hacienda. “I want people to feel proud.”

The hotel represents a departure from other luxury hotels in the region, says Scott Berman, U.S. hospitality and leisure practice leader for PwCs and a long-time South Floridian. “I’d position it in the ultra-luxury category,” he said. “They are breaking new ground,” much as Faena did in Buenos Aires.

Faena is the first South Florida hotel promoting butler service, which is common in Asia but not in the Americas. Marketing is based around the hotel’s design and architecture. And the pricing structure is also an area first: Rates will start at $745 per night throughout the year — a direct challenge to the traditional practice of lowering rates in summer. “It’s setting a very high standard for the rest of the market,” Berman said.

To inform and create the hotel’s vision, Faena brought in filmmaker Baz Luhrman, who provided inspiration, and wife and costume designer Catherine Martin, whose fabric designs appear in carpets and fabrics twined with leaves and flowers. Argentine painter Juan Gatti created The Way to Futopia, the eight large-scale site-specific murals rimming the Cathedral entrance of the Faena Hotel that invoke the epic themes of knowledge, love, war, passion and nature.
“I don’t believe in design for design,” Faena said. “I believe in design as a message.” The Cathedral is intended as “a place of art and culture and reflection”— an homage to creativity and the risk that goes with unique personal expression.

Beauty, magic and art are central Faena utopian precepts. The Secret bar near the theater is a secret garden installation by Argentine artist Amaya Bouquet. Both Living Room and the Veranda dining room are lit by Storms, site-specificchandeliers by Alberto Garutti that flicker every time lightning strikes the Argentine pampas. A loaned Damian Hirst unicorn sculpture, Golden Myth, forms the centerpiece of Pao; a second Hirst, Gone but not Forgotten, in the garden is a nine-foot gilded skeleton of the extinct woolly mammoth encased in a steel-and-glass vitrine. Studio Job crafted the fountain, mosaics and tree-of-life sculpture imbued with symbols linked to Faena’s world view, represented by his trademark white hat and the feature in it that reminds him “that we can fly.”

For Faena, collaboration is key. But ultimately, the details throughout the hotel — from the china in the open-fire restaurant Los Fuegos by Francis Mallmann, to the gold-painted molding of the dinner theater — were shaped directly by Faena. (He also designed the theater’s show.)

That he had a direct hand in every detail is evident; on a tour just days before the hotel opened, Faena repeatedly stopped to talk with dozens of construction workers he knew by name. When he strolled through a wait-staff meeting in Los Fuegos, employees applauded.

“What makes this unique is that every detail, every thought is how to elevate people, how to entertain them,” he said. “This is all the thought, and it was created under the same hat.”