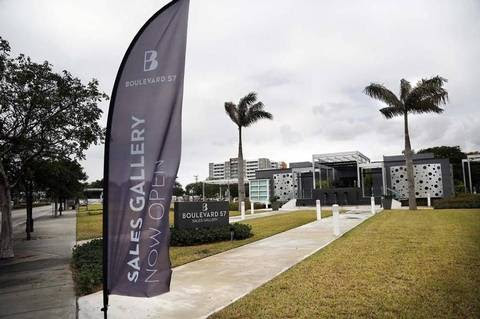 Sales have been suspended at Boulevard 57, an eight-story tower at 5700 Biscayne Blvd. where units start at $600,000, a spokeswoman for Pantin confirmed Monday. Pantin’s family made its fortune in Venezuela’s oil industry before, during and after the regime of Hugo Chávez.

“The sales have not been canceled, we are just reducing our sales cost for the next two quarters,” said a statement provided by the development team. “The condo market has been very slow for the last six weeks and as you may know we are entering in low season for the condo market and we want to cut budget for the next months or until we feel the market has moved for better.”

A strong dollar and weak economies abroad are crippling the foreign buyers who snapped up Miami properties over the past few years. Several new projects have been canceled or put on hold as sales slump, including Ion East in Edgewater and the Collection Residences in Coral Gables.

Existing residential sales fell 10.4 percent in May, according to the Miami Association of Realtors.
Boulevard 57 had pitched its off-the-beach location as appealing to domestic buyers. But it appears they didn’t bite.

“I think the industry expected the project to get put on hold,” said Peter Zalewski, a South Florida real estate analyst. “They were a victim of market timing. I was invited to the launch party [last month] and at the time I told everyone I knew to go because I thought it would be the last launch party of this real estate cycle. ... Going forward, you’re likely to see more projects get shelved.”
Zalewski said it could take two years before the condo market is back in good shape.

But a planned retail component at Boulevard 57 may still happen.

The Real Deal, which first reported the news that sales had ended, said the project may up its retail space from 40,000 to 50,000 square feet and would like to attract a Trader Joe’s or Publix. The website also reported that the entire site may be on the market for $26 million.

Pantin stayed quiet about his involvement in Boulevard 57, keeping his name out of the press and public records after a company he controlled paid $15 million for the 2.3-acre site in 2014. A lawsuit filed by an ex-partner alleged that Pantin used shell companies and front men to hide his identity.

His business ties to the Chávez government drew criticism when they were revealed by the Miami Herald in April and emphasized the unseen forces shaping Miami’s real estate market.

“Miami has become the home for exiles that have been disenfranchised from Venezuela,” Miami Mayor Tomás Regalado said at the time. “There should be a moral stigma when you do business with the government in Venezuela while the people suffer and then come here to do grandiose projects.”


Our relationship with the government is strictly commercial. Gerardo Pantin Shortt

Patin said safety concerns in Venezuela led him to minimize his public role in Boulevard 57 and that his family, which earned $991 million in contracts from Venezuela’s state oil company between 2008 and 2015, played no part in politics. An economic crisis and food shortages have led to chaos in the Latin American nation.

“Our relationship with the government is strictly commercial,” he said.

The setback for Boulevard 57 means developers have tried and failed to bring condos to Morningside since 2003. A previous project, called Kubik, was derailed by neighbors angry over its scale.