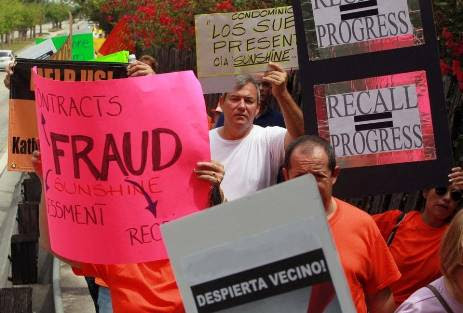 The Florida state agency that regulates condominium associations does not work to protect the tens of thousands who live in condos, resulting in extensive fraud, mismanagement and conflicts of interest among the boards and management companies that govern them, according to a Miami-Dade grand jury report issued Monday.
The report noted a special committee of the Florida House of Representatives published similar findings in 2008. “Sadly, nine years later, this jury has listened to testimony from condominium owners similar to the complaints” gathered by the lawmakers back then.

“Unfortunately and almost irrationally, some of the problems seem to have gotten worse,” the report said.

The findings come amid a condo building boom across the state. There are an estimated 1.6 million condos in Florida today — nearly 300,000 more than in 2007 — and 38 percent of them are in Miami-Dade and Broward counties.

Despite this building boom, the state government did not assign additional investigators to look into the thousands of complaints received each year by the DBPR, according to the grand jury. The agency has only 33 investigators statewide for condo issues, and only 12 work in Miami-Dade.

Florida has more than 20,000 licensed condo association managers and more than 2,000 management companies. By contrast, the Division of Regulation within the state agency has only 53 investigators, who regulate all licensed professionals statewide, including thousands not related to condos.

Stephen Lawson, a spokesperson with the agency, said they are reviewing the grand jury report.

“The department takes very seriously its statutory obligations regarding the enforcement of condominiums,” Lawson wrote in an email Monday to the Nuevo Herald.

The report notes the grand jury heard from DBPR employees, but added their testimony was “guarded and strained” and the witnesses appeared with lawyers assigned by the state. In fact, the agency’s general counsel “actually challenged our jurisdiction and authority to conduct this investigation,’’ the report said.

“Unlike other public officers and officials who appeared voluntarily, to obtain the appearance of two DBPR investigators we were required to issue subpoenas,” the report noted.

The grand jury also reported that the DBPR’s “failure to demand that its investigators utilize, or comprehend basic investigative techniques is breathtaking.” One of the investigators who testified repeatedly said he did not know basic information and needed to consult with his supervisor.

Grand jury members said they were shocked to learn that condominium laws and regulations do not include clear definitions of ethical principles as basic as conflict of interests.

The grand jury issued a series of recommendations for changes in state laws to correct some of the principal issues: open access to condo association records; conflicts of interests among members of association boards; fraud in board elections; the powers of election monitors; and the responsibilities of the DBPR.

Also recommended were criminal punishments for condo board members and licensed administrators who act “in bad faith” for their personal profit or are involved in fraudulent activities. And the report noted that the results of condo elections of board members should be nullified if there’s clear evidence of electoral fraud.
State lawmakers from Miami-Dade who are drafting a law to updating current condo statutes said they are reviewing the grand jury report.

“This report is very revealing and is going to be extremely helpful to the Legislature as we figure out how to fix this very important issue,’’ said State Rep. J José Félix Díaz, a Republican who represents a district that goes from Doral to Kendall and includes Fontainebleau, a neighborhood with many condos.