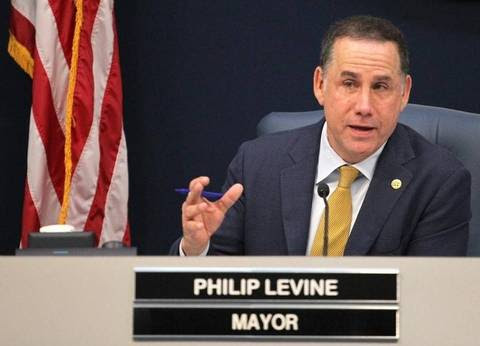 In other words, “You’re fired!”

The exchange between the platform and Levine on Twitter was sparked by an article in Sunshine State News, a right-leaning state news organization, that was critical of Levine’s push for hefty fines against short-term rental sites. Per the city’s code, short-term rentals are banned in the city except for in some multifamily buildings in specified areas.

When Airbnb Citizen, the company’s policy and communications arm, posted the article, Levine fired back.

“Against destroying neighborhoods/buildings [with] short term rentals in Miami Beach! LOVE Airbnb but not in [Miami Beach],” Levine tweeted at about noon Saturday.

Levine and the six Miami Beach city commissioners have been opposed to reaching any kind of agreement with the leading short-term rental platform, instead instating $20,000 fines — the highest in the country — against residents found hosting illegal short-term rentals. Nearly a year into the augmented fines, the Beach has fined renters about a combined $5 million.

Airbnb, which says Levine has ignored requests for a formal meeting, replied asking the Levine to discuss his concerns in person.

“It is disappointing that the only way to reach you is thru Twitter & media,” Airbnb Citizen tweeted.
Levine’s response: “soooooo sad....” with five crying emojis. The site countered, saying it’s sad the 3,000 hosts on the platform in Miami Beach can’t speak publicly on the matter for fear of retribution.
Instead, Levine tweeted saying residents can “speak with their vote!!!MB doesn't want what your[sic] selling!!!!Convince the commission!”

On Sunday, Levine again commented on the article — this time on a Facebook post by Airbnb Citizen. Evoking Trump, Levine commented calling the Sunshine State story a “fake sponsored article” paid for by Airbnb and written by “fake journalists on fake news-sites.[sic]”

In a lengthy post, Levine pointed to the strong opposition against short-term rental platforms like Airbnb in San Francisco and New York City, where the cities have also imposed fines — albeit smaller ones — and regulations for renters. He argued short-term renting “destroys neighborhoods, buildings, decreases real estate values and increases costs for workforce housing!!!!!”

However, he pointed out, he hasn’t had to use Airbnb to supplement his income.

“Thankfully as a self made successful entrepreneur I don't need Airbnb money and would never crumble to their strong arm Mafia tactics!!” Levine commented on Airbnb Citizen’s Facebook. “Matter of fact, I would like to tighten up our short term rental laws even more so that future political leaders don't succumb to #CyberBullying.”


The mayor has previously told the Miami Herald he thinks the fines should be increased.