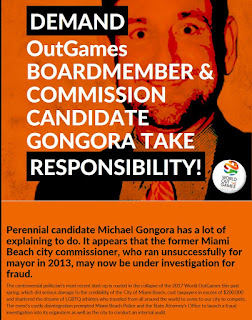 Have you heard about perennial candidate Michael Gongora’s most recent fiasco?

The Miami Beach Police are really into it.  Prosecutors at the State Attorney’s Office want to know more.  Tax-payers have already spent $200,000 on it.

So why isn’t Michael Gongora taking any of the credit?

Maybe it’s because of the accompanying fraud charges such an acknowledgement could bring.

The controversial politician’s most recent dust-up is rooted in the collapse of the 2017 World OutGames this past May, which did serious damage to the credibility of the City of Miami Beach, cost tax-payers hundreds of thousands of dollars and shattered the dreams of LGBTQ athletes who traveled from all around the world to come to our city to compete.

The event’s costly disintegration prompted Miami Beach Police and the State Attorney’s Office to launch a fraud investigation into its organizers as well as the city to conduct an internal audit.

Learn more about Michael Gongora’s involvement as an OutGames board member.

Gongora, who is currently running for city commission (again), is now lying about his role in the organization.

Click here to demand that Michael Gongora take responsibility for his involvement in the collapse of the 2017 World OutGames and the $200,000 Miami Beach poured down the drain as a direct result.

Michael Gongora has a lot of explaining to do.  He should start with the voters.