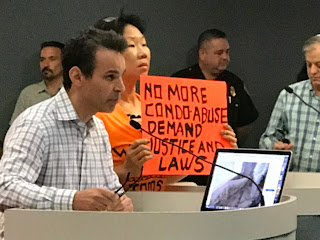 Another successful demonstration of support to a Condo owner in need

The ¨naranjitas¨ of ReformFL attended the Miami Beach Commissioners meeting on July 26, 2017 to support Martin Gonzalez an owner in Murano Condo in Miami Beach.

Mr. Gonzalez addressed the commissioners and the Mayor on the abuses he has been put through by the association at the Murano.  His continued calls for help to the Miami Beach Police Department have been ignored and his demand to apply the new FS-718 Condo “Criminal” Law has been answered with the excuse of ignorance of the new law.

That is not acceptable.

Chief Oats of the Miami Beach Police Department promised to meet with Mr. Gonzalez to go over his situation.

The City Manager,  Jimmy Morales, mentioned that he will coordinate with different players to implement the new FS-718 law.

Our champion, Commissioner Aleman, told our group that Miami Beach is getting ready to train MBPD officer on the new law.

We need a dedicated group of officer to investigate economic crimes and implement the new Condo Law in Miami Beach.  It seems that the MBPD has sufficient resources and many positions unfilled.

An anecdote:  Outside we asked Chief Oates to take a picture with our “naranjitas” and he told us “he did not feel comfortable.”    Just saying. 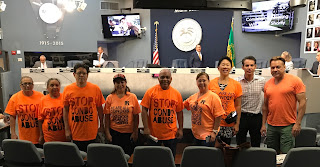