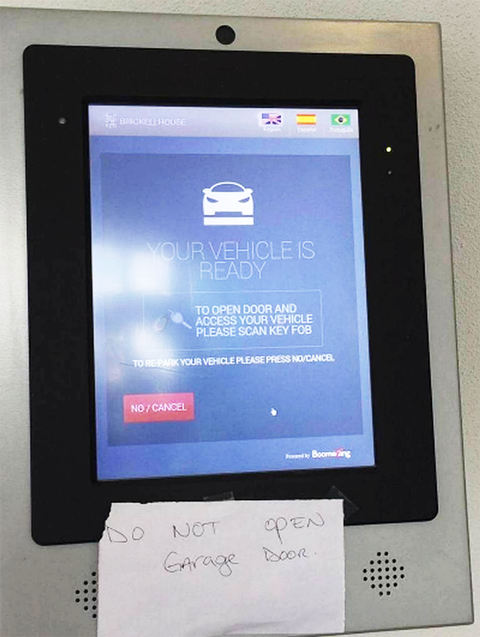 Condo association of 385-unit BrickellHouse suing its developer and Harvey Hernandez, head of the company

Garage shuttered in November 2015, two months after condo was turned over by developers to the condo association

The robot era is here, and the residents of BrickellHouse are none too pleased.

The condo association of the Brickell building, where the average unit costs $465,000, has amended a lawsuit filed in January against the developer of BrickellHouse over the tower’s faulty and subsequently shuttered robotic parking garage.

Residents of the 385-unit building at 1300 Brickell Bay Drive are suing for breach of warranty. Among the complaints:

▪ Lack of a contingency plan when the automated system failed in November 2015.

▪ Breach of “fiduciary duties,” after residents were forced to arrange and pay for alternative parking in the densely populated Brickell area.

▪ “Damages,” to finance the repair or replacement of the system.


The developer and his affiliated provider essentially used the buyers at BrickellHouse to fund a research and development project for the viability of this technology in the marketplace. Helio De La Torre, attorney

Promised a convenient and efficient way to park their cars, many residents were lured by the automated garage. Soon after the building opened in November 2014 and move-in began, however, glitches surfaced.

“[The robotic garage] has never worked properly or as promised since its inception, with waits as long as two hours during peak times, and now the owners and residents have been left without parking,” said an email statement by attorney Helio De La Torre of Siegfried, Rivera, Hyman, Lerner, De La Torre, Mars & Sobel, the firm representing the condo association. “The developer and his affiliated provider essentially used the buyers at BrickellHouse to fund a research and development project.”

The defendants listed are the entity formed for the development of the project, BrickellHouse Holdings LLC, and its principal, Harvey Hernandez, head of Newgard Development Group.
Newgard Development Group issued a statement saying that it is “working diligently with the condominium association of Brickellhouse, which [since September 2015] owns and controls all aspects of building management including the parking garage, to help bring a resolution to the unfortunate matter pertaining the building’s robotic parking garage.”

The statement attributes the failure of the garage to “a confluence of factors,” including the “unexpected” bankrupty of Boomerang, the New Jersey-based company that built the robotic system, its first ever.

According to the lawsuit, one of Boomerang’s affiliates in the project was Parking Source, a company controlled by Hernandez.

“So not only was he aware that the system was the first of its kind but had an intimate relationship with the manufacturer,” said attorney Lindsey Lehr, who is working alongside De La Torre on the lawsuit.

Earlier this year, Newgard broke ground on a luxury condo project in Fort Lauderdale dubbed Gale Residences. No word yet on whether it will feature a robotic parking garage.