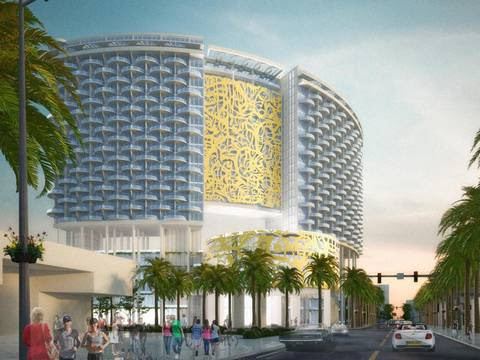 
A month after a plan to develop a hotel adjacent to the Miami Beach Convention Center failed at the ballot box, officials want to salvage that proposal and use public input to tweak it enough to satisfy more voters.

But it has to be in the same location, on public land behind the Fillmore Miami Beach, and the city would have to move fast to get it on the November ballot with the presidential election.
The pressure’s on as a majority of the City Commission, along with local business and tourism leaders, want to see a hotel approved as soon as possible. They say a hotel next door is crucial to the success of the convention center, which is currently undergoing a $600 million renovation and expansion.

The previous plan failed to get the required 60 percent approval necessary to lease public land in the convention center neighborhood, with only 54 percent in favor. Many voters felt the hotel would worsen already-congested streets in South Beach. Others opposed the size of the project.
So City Manager Jimmy Morales is recommending the city survey voters on what elements of the existing proposal they want to see changed. Then a public meeting would be held with hotel opponents and proponents to discuss the survey results.

In May, the city would use feedback to renegotiate the lease it had worked out with Portman Holdings, the Atlanta-based developer who had proposed to privately finance a $400 million, 288-foot tall hotel with 800 rooms at the corner of 17th Street and Convention Center Drive.
Business and tourism leaders in the Beach are clamoring for a headquarter hotel. Officials from the Greater Miami Convention and Visitors Bureau, Miami Beach Chamber of Commerce and Greater Miami and the Beaches Hotel Association all stumped for the project, saying the kinds of big conventions that they wish to attract won’t come unless there’s a hotel attached to the convention center.

Jack Portman, vice chairman of Portman Holdings, joined these organizations in campaigning for the hotel before the March 15 referendum, touting the projected local economic benefits of attracting citywide conventions that require a headquarter hotel.

It is unclear just how interested Portman is in going through another referendum. The firm was part of a team that pursued a previous proposal to redevelop the convention center and its surrounding neighborhood — a plan that was completely scrapped in favor a new approach to separate the convention center renovation and the hotel. Portman Holdings spent $1 million in political advertising for the failed referendum.

On Friday, Portman declined to elaborate on Morales’ memo.

“Portman Holdings is not in position to comment on the City Manager’s memo,” he said in a statement to the Miami Herald. “But we continue to believe Miami Beach is an exciting city and will consider any future opportunities at the appropriate time.”

Many voters opposed the hotel because they believed it would make traffic in South Beach worse.
Morales and his administration propose an aggressive schedule in order to make the Aug. 9 deadline for submitting a question for the Nov. 8 ballot.

In order to avoid starting over with a new lease, a process that would take too long to make the November ballot, the city would have to keep the hotel on the same 2.65 acres where the previous plan was proposed.

The city’s consultant, business and tourism chiefs all insisted that a headquarter hotel needs to have at least 800 rooms in order to bring in lucrative citywide conventions. Beach officials have a tall order if they want to see a hotel approved — to propose a building that is the right size and convince voters that traffic won’t get worse.

In a statement Friday afternoon, Morales said that he is not ruling out any alterations to the current hotel plan.

“We are currently investigating any and all possible options,” he said.

The City Commission will discuss the issue Wednesday.