A tripled Zika zone has #MiamiBeach wary of the next step 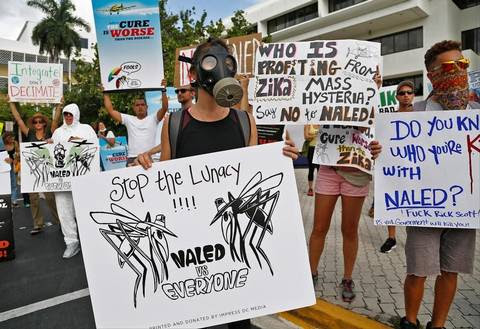 On Monday, Miami Beach could be the only place in the U.S. with active Zika transmission, leaving locals and tourists alike wondering what’s next for Miami’s tourism hotspot.

Although Miami Beach’s Zika zone has tripled in size, the space the city will aerially spray for mosquitoes has not.

A statement from Miami-Dade Mayor Carlos Gimenez on Saturday confirmed that the spray of controversial pesticide naled will be relegated to the original 1.5-square-mile zone from Eighth to 28th streets. The next spray is planned for 6 a.m. Sunday.

“We will review the epidemiological and trap data over the weekend, and consult with our health and environmental experts, and the City of Miami Beach, before making further decisions about the best way to break the cycle of transmission in the expanded area,” he wrote.

Friday saw five new cases of the virus, bringing the total to 93 locally transmitted cases. Two were in the original zone and three were in the expanded zone, which stretched up to 63rd Street.

The county is monitoring 19 mosquito traps around South Beach. A fifth trap with Zika-positive mosquitoes also was identified Friday. Of the five, the only positive location identified was the Miami Beach Botanical Gardens.

The Miami Herald filed suit against Miami-Dade County on Friday to find out where the other traps are.

Miami Beach Mayor Philip Levine said that truck spraying of larvicide was to begin Saturday, and code enforcement started sweeping for standing water in the new zone shortly after the news broke.
The county fought the spread of the virus from the start with aggressive marketing and pesticide spraying campaigns. But it’s the airplanes misting the city with the insecticide naled that are drawing the ire of residents.

In Miami Beach, anti-spray protesters have packed City Hall twice to express their displeasure and fear of the spray. Their actions delayed a second spray by 24 hours.

Even outside of the organized protests, locals are wary of the spray, at times calling the cure worse than the disease.

“It’s getting closer and closer,” Polanco said. “You don’t know what’s going to happen next.”
Delpuppo said the virus is common in Brazil, his home country, but he thinks that the county is already taking care of Zika well enough here without the aerial spray.

“I mean, how many deaths have there been?” he asked sarcastically. “It’s not that bad.”

What worries them both is the effect on tourism in Miami Beach, which had already taken a sharp downturn when the zone was a third its size. The Fontainebleau hotel has had its worst three weeks in 15 years.

Miami Beach resident Gaylene Horsefall, 55, said Saturday that her northern friends and relatives want to talk about Zika more than anyone she knows in Miami-Dade.

“It’s not a dinnertime conversation down here,” she said.

Horsefall, who works in the medical field, said she’s reading studies on the effects of naled to determine her position, but she worries for her friend’s daughter, whose asthma gets worse every time pesticide is sprayed.

Her husband, 43-year-old David Horsefall, said he’d be interested in the effects of the “GMO mosquitoes” of Monroe county. The male insects are bred so that when they mate with infectious female mosquitoes, their offspring die before they reach adulthood, stopping the spread of the virus.
“I think it’s a good idea in the long run,” he said. “In the short term you’ll still get bit.”
For 80 percent of people infected with Zika, a bite is all they’ll ever feel. The minority who show symptoms have fevers, red eyes and rashes. That is, unless you’re a pregnant woman or a woman trying to be pregnant.

Two Vero Beach OB-GYNs walking along the boardwalk Saturday said that it’s all their gynecology patients ask about.

“Mainly I’m trying to talk them down from the ledge,” said Lindsey Bruce, 38. She said that the virus is so new, it’s hard to keep up with the latest Centers for Disease Control recommendations.
Her colleague, Lindsay Goodman, 34, said she’s amazed how quickly doctors are responding to the crisis, but it could be better with more money.

“There’s a disproportionate amount of media coverage and political coverage, and not enough government funding,” she said.

Along with the news that the Miami Beach Zika zone has grown, Scott allocated $10 million in state funds to combat the virus, bringing Florida’s total bill to $36.2 million. Congress has yet to approve any money for the mosquito-bourne illness.

However, spraying alone isn’t the solution. As the county and CDC’s campaigns advise, residents must drain standing water, cover themselves with long sleeves and use insect repellent.
As 54-year-old Rigo Franco put it, “It’s not only in the zone. It’s the people in the zone who carry it outside the zone.”

Franco, standing outside his Miami Beach condominium, said, “I think it’ll spread, eventually.”
On the mainland, things are looking up.

Wynwood, the first spot in the continental U.S. to have local transmission of the virus, may no longer be a transmission zone by Monday, Gov. Rick Scott announced Friday. Zones are considered clear after 45 days with no new infections.