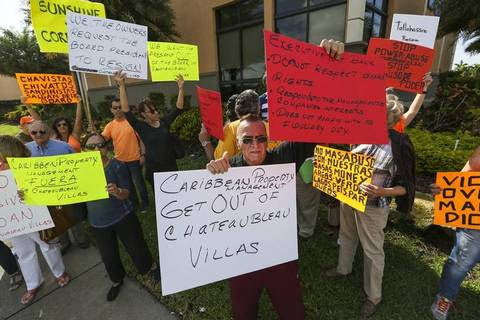 For years, too many condominium associations and their management companies have acted as if they were dictatorships.

That soon will stop. By a vote in the Florida Legislature, many of the abuses in which these association managers engaged just became criminal offenses, thanks to a bill passed in the state Senate on Monday. The only thing missing now is the governor’s signature.

That’s great news for the state’s condo dwellers, especially those enduring abusive association management. They now have some recourse, and the law is on their side.

According to the amendments to Chapter 718 of Florida law, which regulates condos, evidence of fraud in board elections become prosecutable. Among those actions now considered punishable crimes: signature counterfeiting, document manipulation, and ballot theft. Those convicted face steep fines and even jail time.

The changes also makes it a crime to hide or alter public records related to the condominium, mainly past financial reports, with the intention of concealing or facilitating fraud.

The legislative action comes a year after the publication of an excellent joint investigative series by el Nuevo Herald/Univision 23 -- “Nightmare Condos” by reporters Brenda Medina and Enrique Flor.

It revealed cases of condo associations’ electoral fraud, the falsification of signatures, conflicts of interest, alleged misappropriation of funds, you name it. Offenders usually walked away, unpunished.

The series was followed by a Miami-Dade grand jury report that echoed the series’ troubling revelations. The jury made 29 corrective recommendations and asked for substantial changes to the state law that regulates condos and the state agency that should ensure compliance with that law.

We praise the Legislature for combating the plague of condominium fraud. In Florida, there are more than one and a half million condominiums, and more are built every year.

This boom, sadly, opens up the possibility of fraud in their administration. Often targeted are the coffers filled tenants’ maintenance fees. In the past, many who have abused or defrauded associations have walked away unscathed since there were no laws specifically addressing these issues.

The heroes in this story are State Sens. René García, R-Hialeah, and José Javier Rodríguez, D-Miami. In the House, the sister bill was shepherded through by Rep. José Félix Díaz, R-Miami — and a bus full of Miami-Dade residents, all victims of condo associations and all now civic activists because of it. They went to Tallahassee to rejoice and watch the bill pass in the Senate. They were the people’s voice in this effort. We congratulate their squeaky-wheel civic engagement.

As for the bad guys: The grand jury cited irresponsible inaction on the part of the Department of Business and Professional Regulation.

There is no excuse for continued departmental indifference to condo owners’ distress. It’s imperative that authorities enforce the new law once Gov. Scott signs it — which he should: Expediently investigate alleged abuses; follow the irregularities; and examine negligent condo management associations — the department must undertake these tasks with a sense of urgency.

The passage of the bill is a good first step to combating condo fraud and bringing Florida condo associations under the protection of the Sunshine Law.