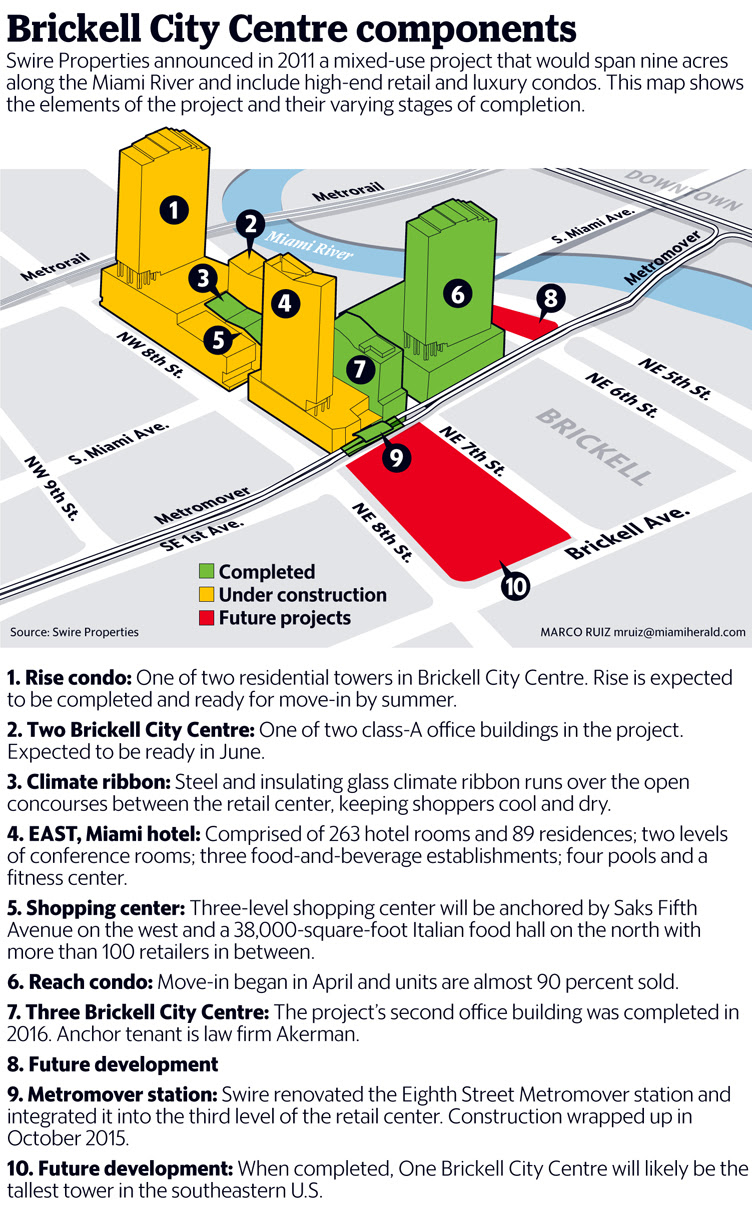 The project’s origins date back to 2008, when the condo market hit rock bottom amid the recession

As talk of the softening condo market buzzes through South Florida, a massive project in Miami’s urban core is unfolding.

As it debuts — and on schedule, no less — Brickell City Centre, a mixed-use complex of luxury condo towers, class-A office buildings, a five-star hotel, and a sprawling open-air shopping center featuring Saks Fifth Avenue, is expected to transform Brickell’s business district from a banking ghetto to a true live, work, shop and dine nexus.

The 5.4 million-square-foot development is designed to elevate the downtown Miami pedestrian experience and breathe new life into the neighborhood. With Swire Group’s track record of successful development on Miami’s Brickell Key and in the parent company’s home city of Hong Kong, the odds are in its favor.

“This destination is — and I don’t wanna overuse the word — pivotal, and a catalyst,” said Alyce Robertson, executive director of the Miami Downtown Development Authority.

The project’s caliber and scale have raised property values west of the waterfront. Surrounding developments have even taken to marketing their own projects around City Centre, calling it a neighborhood amenity.

Already built are two elements key to access: a Metromover station refreshed by Swire and integrated into the project, and underground parking stretching across five continuous city blocks, with entrances facing major arteries.

By building during the down cycle and starting early, they had pricing power that allowed them to achieve this scale. Anthony Graziano, real estate analyst

Recently opened is one of two condo towers, the 390-unit Reach. The second 390-unit tower, Rise, is expected to be completed this summer. Also completed is the 130,000-square-foot Class A office building. The 352-room upscale hotel, EAST, is slated to open July 31. The first shops in the 500,000-square-foot multilevel retail area — including Saks Fifth Avenue — are slated to open in the fall. A timeline has not yet been set for an 80-story third tower expected to be the tallest building in the southeast.

All were designed by Miami’s Arquitectonica.

Plans for the site’s northeast corner have not yet been disclosed.

Unifying the sprawling complex is its platform design, set above the city that allows pedestrians to stroll from one building to the next without crossing the street. And above it all is a first-in-the-world climate ribbon, a passive cooling system that offers shade, collects rainwater and doubles as an eye-catching attraction.