YOU SAW IT HERE FIRST: Danger In The Sand 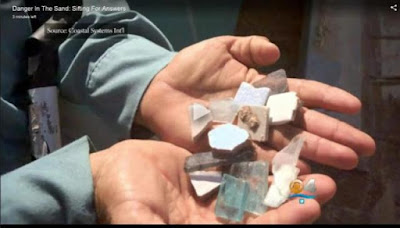 MIAMI (CBSMiami) – It was not a picture postcard image. Vacationers have been frolicking on Miami Beach just yards from bulldozers, back hoes and mechanical sand sifters.
For weeks, convoys of dump trucks have streamed across swaths of Miami Beach in a big hurry to clean

, replace and swap out some 20-cubic yards of sand.

For onlookers, including residents, it was a dizzying mélange of cleanup efforts ordered by the State of Florida.

The reason? Shards of glass, rusted nails, construction debris of all sorts were discovered on the once pristine beach after an 18-inch blanket of sand was donated and deposited over a year ago.
Residents walking on the sand detected something was wrong more than a year ago. The area in question and undergoing some type of remediation runs from 53rd Street to 59th Street.
Mike Daley who loves to walk the beach and  lives nearby was one of the first to become alarmed  at finding construction debris in the sand.

“We would actually walk around and see pieces of glass and nails,” Daley told CBS4’s Chief Investigative Reporter Michele Gillen who joined him on the beach, describing the discoveries as frightening.

“Yes it was scary. Because there are kids that live down here and no one knew about it,” shared Daley.

“I don’t think there was oversight on what they were putting on our sand,” she told Gillen.
Public outrage is shared by Miami Beach officials and administrators. Their hands are largely tied when it comes to the delivery of sand to the beach for restoration because the beach is technically owned by the State of Florida. They are in charge of beach restoration. Miami-Dade County holds auxiliary responsibility and oversight.

Elizabeth Wheaton, Director of Environment and Sustainability for Miami Beach, sat down with Gillen to review the discovery of the debris over a year ago and the city’s efforts to push the state and the county to act and hasten clean up.

Efforts were hampered by last year’s turtle nesting season which runs from May to October.
Wheaton wanted to expedite sand replacement and or cleaning as soon as possible given potential danger to beachgoers.

“We realized that when it’s started to rain the debris would be coming up,” shared Wheaton. “Our concern was that in the sand there were bits of construction debris. It is worrisome anytime you have something on the beach that could be a potential hazard and concern to those beachgoers. For Miami Beach our beach is our number one asset. So it’s very important we keep our beach open and accessible to the public and that we work with the county and state to see that the beach is safe for residents and tourists.”

The epicenter of this complicated cleanup? The excavation of this a surfside property cleared for the erection of the condominium named   Chauteu Fendi.
By Michele Gillen

By Florida law, excavated sand, a byproduct of booming condo development, cannot be thrown out but must be cleaned, shifted and essentially donated back to the beach given beach erosion and the need for more sand.

How did the construction debris end up in the sand?

CBS4 News reached out to the developer of the project, the Chateau Ocean LLC. Late Monday afternoon they agreed to an interview with CBS4 to be done Wednesday. The construction company hired to sift the sand in question, Coastal Construction, responded to CBS4’s request for an interview by providing a statement that read, in part, “The sifting process did not produce the desired results.”
CBS4 reached out to the State of Florida and did met up with the inspector who records show was assigned the case of contaminated sand cleanup, Christian White. Gillen asked if original donated sand had ever been shifted.

“I can’t speak on behalf of the contractor. I can only speak in behalf of the state,” said White.
But when Gillen pushed for the opinion of the state, White directed her to the department’s press office in Tallahassee. CBS4 reached out again to that office and continues to seek details on what exactly happened with the cleaning, the sifting of the sand.

Continuing on the path to find answers, Gillen then visited with the point person now in charge of Miami-Dade County oversight for the project and all such beach sand donations. The initial managers in charge, CBS4 has been told, both recently retired.

Jaime Monte is now manager of the Restoration and Enhancement Section of the Department of Regulatory and Economic Resources, Division of Environmental Resources Management for Miami-Dade County.

She said she is investigating along with other agencies with a focus “to look into where the breakdown occurred.”

How do we take steps to prevent this from happening in the future?

On Wednesday, the city of Miami Beach will be introducing a resolution that city insiders say could provide better protections for the city and when the state decides to have sand donated for needed replenishment.

The CBS4 investigation into what happened continues with ongoing requests to the state of Florida, as suggested by their local inspector, for details on Miami Beach  donation of sand and others.
Meanwhile, an intermediate inspection occurred in late April. The final one by the state will reportedly happen in the near future.