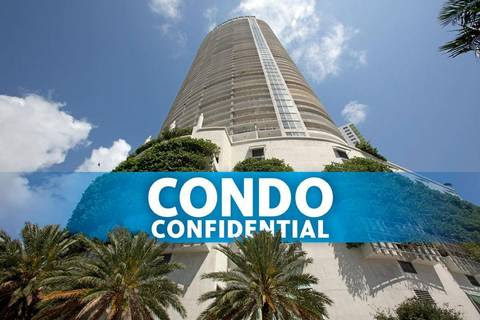 Sebastián Rodriguez Robles was 26 when he spent $3.1 million on 13 condos at the Opera Tower

He said he earned the money from his legal practice

A lawyer who would later secure a senior government post in Mexico’s poorest state spent $3.1 million on Miami condos over a five-week span in 2012. He was 26.

Sebastián Rodriguez Robles bought 13 condos at the Opera Tower in downtown Miami. In a series of telephone interviews, he said the money came from his earnings as a lawyer.

He put down $1.2 million in cash, covering the balance with loans from the luxury tower’s developer.
In Miami-Dade County tax records, his address is the same as that of a Mexican law firm popular with politicians that was once investigated for fraud and tax evasion. That inquiry led to a 17-month prison stay for a former governor of Chiapas state, where more than 75 percent of residents live in poverty, the highest rate in Mexico, according to government figures.

Rodriguez Robles said the firm was a former client, and that he merely used its offices as a mail drop.
There’s no evidence of wrongdoing in Rodriguez Robles’ purchases. He declared the companies that own the condos to Mexican authorities when he entered government service earlier this year, sharing a private financial disclosure form with the Miami Herald. And he doesn’t show up in the Panama Papers, the massive trove of secret offshore documents that exposed the dealings of the world’s rich and powerful.

But the deals underscore how Miami has become an overflowing piggy bank for money earned abroad — and how eager the local real-estate industry was to attract foreign money during the economic downturn.

Thanks to loans from the development company of Tibor Hollo — the South Florida real-estate magnate who built the Opera Tower and helped revitalize downtown Miami — Rodriguez Robles was able to buy his condos with little vetting. At the time, with the economy in shambles, many otherwise credit-worthy customers couldn’t get bank loans in South Florida.
While foreign nationals with cash to spare helped revive Miami real estate prices, they also squeezed out local buyers.

Politics and government service are often a road to riches in Mexico. The country ranks poorly in Transparency International’s annual index of perceptions of public corruption, coming in at No. 95 out of 168 nations in the 2015 index.

Rodriguez Robles would not secure work with the Chiapas state government until four years after his Miami purchase. He started on Jan. 13, 2016, as a senior official in the state’s finance department, leaving the post April 9 because of what he said were pressing family reasons, including a cancer diagnosis for his mother.

Nonetheless, Rodriguez Robles — as well as the ruling party of Chiapas — seem determined for his Miami condos to stay under-the-radar.

“I’ve got nothing to hide. But there’s also nothing to publish about me either,” said Rodriguez Robles, who in his free time is an accomplished equestrian show jumper. “What’s the story? That Sebastián Rodriguez bought condos in Miami five years before he occupied a public position? I’ve paid my taxes.”

Although Rodriguez Robles said he had already left his government post, his name remained on a Chiapas government website when the Herald first tried to contact him in April. It was removed shortly after.

David León Romero, a spokesman for the Ecologist Green Party of Mexico — which controls the state government of Chiapas and is allied with Mexico’s ruling Institutional Revolutionary Party — said Rodriguez Robles was not a party member.

León Romero did, however, broker phone interviews with Rodriguez Robles, and days before publication of this article called to ask if editors would kill the story. In exchange, he said, Rodriguez Robles would name other Mexican politicians who own properties in the United States. The offer was declined.

The governor of Chiapas state, Manuel Velasco Coello, is considered a rising star in Mexican politics. Two years ago, Velasco married the telenovela star known as Anahí, a match that boosted his national prominence. Mexico’s President Enrique Peña Nieto has also benefited from his high-profile marriage to another former small-screen star, Angélica Rivera.

Mexican public figures rarely face inquiries for owning expensive properties abroad or flouting their wealth in other ways.
One exception: The Herald published a story April 15 about how Bernardo Quezada Salas, a former teachers’ union official who is now a federal legislator, and his relatives spent $6.3 million on a single day in 2005 on 11 luxury condos at a high-rise on Miami’s Brickell Avenue.

Mexican congressional leaders have called for an investigation.

The Herald learned of Rodriguez Robles’ condo purchases from Julio C. Roa, a Mexican blogger who runs the investigative news portal enlapolitika.com. Roa’s website broke the news last week.
Rodriguez Robles owns the condos through 13 Florida limited liability companies, although he said he’d signed a contract to sell one of the units. Roa noted that Miami-Dade tax records list a Mexico City address for 11 of the 13 companies.

That address in the modern Santa Fe business district is shared by two brothers, Victor Manuel and Alejandro Álvarez Puga, who have a long and somewhat troubled history in Chiapas.

Their Álvarez Puga firm offers services like payroll and tax payments, and came under criminal investigation in 2011 for tax evasion and fraud. The probe fizzled but was a factor in the arrest of a former Chiapas governor, Pablo Salazar Mendiguchia, who spent 17 months in prison on embezzlement charges until the charges were dropped in November 2012. Salazar was accused of funneling business to the Álvarez Puga firm in exchange for kickbacks.

It is Victor Manuel Álvarez’s wife, however, who is better known. A personality on the TV Azteca network in Mexico, Inés Gómez Mont made headlines in 2008 when she interrupted a Super Bowl media day event to shout out at New England Patriots quarterback Tom Brady.

“Tom, I'm in love with you! Will you marry me please? Marry me please! Say yes!” begged Gomez Mont, who was wearing a wedding dress.

Rodriguez Robles said the Álvarez Puga law firm was a client of his and he used its office to collect mail. He said the brothers had nothing to do with his condo purchases.

After graduating from the Iberoamericana University with a law degree, Rodriguez Robles said he practiced administrative and tax law. By 2012, he said he’d saved enough from client fees to take advantage of a downturn in the Miami real estate market.

The individual prices for the condos he bought at Opera Tower ranged from nearly $196,000 to more than $297,000. All of the units are rented out, he said. In a recent month, Rodriguez Robles said the properties generated $47,000 in rental income, a generous figure given that units at the tower rent for an average of $2,000 per month.

About 60 percent of those funds came from loans made by the tower’s developer, Florida East Coast Realty.

On a foreign buyer, there’s not too much background check we can do. Jerome Hollo, developer

The 56-story Opera Tower opened at the end of 2007 as the nation’s real-estate market was collapsing. The giant tower offered more than 630 units. But many banks had cut back on issuing residential mortgages. Buyers were hard to come by and FECR rented out many units.

The downturn was an opportunity for some: A weak dollar and rock-bottom prices made Miami real estate a juicy target for foreign investors.

In the absence of bank financing, the developer began offering loans directly to buyers.
By getting a loan through the developer, Rodriguez Robles didn’t have to submit to the extensive due-diligence checks that banks and mortgage brokers are required to perform on their clients. So-called “know your customer” rules are designed to make sure financial institutions are working with law-abiding people who have clean financial histories.

“Regulators are going to take a much greater interest in all of this other lending,” Thomas said.
Rodriguez Robles said the only documents he had to provide to the developer were bank statements and credit history.

“We were comfortable with the collateral,” said Jerome Hollo, senior vice president of FECR. “On a foreign buyer, there’s not too much background check we can do.”

With the market now recovered, the developer has stopped offering the loans.