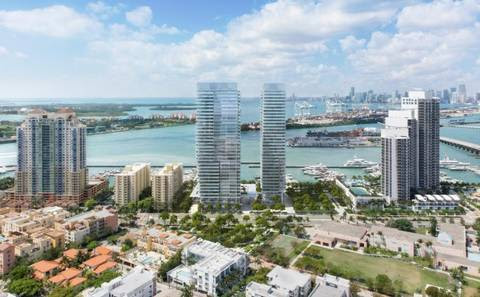 Even though Miami Beach voters rejected the last two high-rise plans put before them, two developers are trying to see if they can get height limits lifted — for a price.

It might be very high. In new condo tower proposals, each has added an expensive incentive to sweeten the deal. One is offering to build a 30,000 square-foot transit hub at the base of a 300-foot condo tower. The other is willing to contribute $100 million toward a light rail system in South Beach in exchange for the rights to build two 400-foot residential towers at the city-owned marina.

The community is known for keeping a critical eye on all new development, with particular scrutiny aimed at size and square footage. These developers are banking on using public benefits to convince neighbors to look past these aspects. But will residents buy it?

Both the Ocean Terrace and convention center hotel proposals drew criticism for their size.

Many residents are skeptical. They want to have more input, and some worry it could lead to more similar deals.

“I’m just really concerned that this is a slippery slope that we’re going down,” said Ronald Starkman, a board member for the South of Fifth Neighborhood Association at a recent neighborhood meeting. “This, I think, sets a type of precedent that we all need to be worried about.”

The size of proposed buildings figured prominently in the recent failures of two significant proposals that required voter approval: a hotel for the Miami Beach Convention Center and the redevelopment of Ocean Terrace. Both projects were sent back to the drawing board in hopes of drawing more public support, with Ocean Terrace recently winning an initial approval for a height increase from the City Commission.

Only one of the two new tower proposals would require a public vote; the other would need only City Commission approval, but residents will undoubtedly follow their progress and weigh in on both.

City officials want to move fast on a light rail system that would loop around South Beach, forming one third of what would be a mass transit link from downtown Miami to the Beach. The expectation is that the Beach service will connect to a larger mainlandsystem that would cross Biscayne Bay along the north side of the MacArthur Causeway.

Both systems would have to connect somewhere, most likely the north side of the east end of the causeway, where cars can either continue onto Fifth Street or a take a flyover onto Alton Road.
“There has to be a place for the light rail to go, it has to land somewhere,” said Commissioner Michael Grieco at a recent public discussion. “It has to be in the area of Fifth and Alton.”

Enter developer Russell Galbut, who owns the paved parking lot on the north side of Fifth Street and Alton Road. Galbut, managing principal at Beach-based real estate investment company Crescent Heights, wants to build the city a 30,000 square-foot transit hub at the base of a 300-foot condo tower.

Preliminary plans propose transit and parking services on the first six levels, with buses passing through levels one through three and platforms for light rail occupying the next three. Some retail would go in the transit hub. The residential tower would rise another 24 stories above the hub.
The city would not have to put up any money for the facility, but it would have to increase the maximum allowable height for the property from 75 feet to 300 feet.

The concept is very preliminary but intriguing to residents and City Hall. The Beach just last week received three bids for the streetcar, and City Manager Jimmy Morales is not expected to recommend a bid until later this summer. A consultant’s environmental analysis, necessary to vie for state funding, is in progress.

Meanwhile, Galbut is asking Beach planners to review details of an ordinance that would change the area’s zoning to allow for such a tall building. Transportation officials have to look at whether 20,000 square feet is the right size for a transit hub. There’s plenty of vetting left to do.

Neighbors want to make sure they’re a part of the conversation, starting now.

“Our interest is in making sure whatever is decided is decided transparently,” said Peter McLean, a board member at Bentley Bay Condominiums. He lives in one of the two bayfront towers across from Galbut’s site. “We want to make sure all impact studies, traffic studies, etc. are vetted openly.”

McLean said Galbut’s team will present to the condo board next week. Galbut is also speaking at 8:30 a.m. Tuesday at South Beach restaurant Manolo during the weekly civic breakfast known as the Tuesday Morning Breakfast Club.

Because the land is privately owned, no public vote is needed to change the zoning for a transit hub and taller building. Commissioners would have to pass an ordinance to make it happen.

Further south on Alton Road, the operator of the Miami Beach Marina and a developer want to overhaul the prime piece of city-owned waterfront land.

A surface parking lot and the building with Monty’s Sunset restaurant currently stand on the property, which the marina has leased from the city since the mid-1980s. Fort Partners, the Miami-based real estate company that is leading the redevelopment of the Surf Club in Surfside, envisions a similarly-sized retail and restaurant complex at the base of one of two 410-foot condo towers. About 700 parking spaces would be placed underground, and a public park would go above the parking.

The developer is willing to pay the city $100 million to buy the “air rights” needed for the condo towers. Air rights would give the developer the ability to build above the marina. That money would go into a transportation trust fund that would help finance the streetcar, which will cost hundreds of millions of dollars.

The city is hiring an appraiser to assess the value of the land and its air rights. The dollar amount is a significant facet of the deal, but residents also want assurances that the restaurants at the marina will be neighborhood-oriented and not destinations for outside visitors. Some want to see space carved out for a dry cleaner and other services that would cater to locals. Others want to make sure the residential units, which everyone acknowledges will probably be second homes for seasonal residents, are regulated so short-term rentals don’t create a nuisance.

Fort Partners also wants to contribute to physical improvements to South Pointe Elementary, the school across Alton Road, and pay for traffic calming measures along Alton.

The developer has already started making the rounds with neighbors, pledging to meet with associations and individual residents to make its pitch. On this project, public support isn’t just another part of the developer’s pitch to the City Commission.

Before a shovel could hit the publicly owned ground, three key components would need approval through public referendum:

▪ Terms of the ground lease
▪ Sale of the city’s “air rights,” or ability to develop above the marina
▪ Increase in the maximum floor-area ratio for the development, which is the formula for calculating allowable square footage

Gerald Posner, a neighborhood association board member, said residents will need to stay as involved as possible to make sure their concerns are addressed.

“A lot of people in other parts of the city will look at this and say, ‘$100 million for public transport — and a group of well-entitled people south of Fifth are worried about their view lines?’ That’s not going to carry the day,” he said.

Even with the $100 million carrot, the proposal is a massive ask for a community that hasn’t shown an appetite for changing land-use rules.

Fort Partners would like to see the referendum questions on the November ballot, citing high turnoutfor a presidential election. But residents wants to iron out specifics before casting a vote.
Michael Conaghan, chief operating officer for Fort Partners, said he realizes it will take a lot of outreach to convince voters.

“We know we won’t please everybody, but it’s our effort to try and please as many people as possible,” he said.